Overcoming a Fear of Dogs 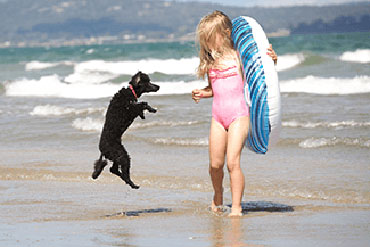 Cynophobia is the fear of dogs. As far as phobias go, it is a relatively common, although the fear of snakes or spiders is seen more often in therapy. The reason I decided to write an article about dog phobia is because many people suffer from it.

One of the things I often see is that the person suffering from cynophobia would actually like to own a dog. That may seem odd, but if you think about what great companions dogs are, it’s not that surprising. I have heard a number of cynophobes say they sought therapy because they saw how much friends and family enjoy having a dog as part of the family.

For years, therapists and psychologists have hypothesized the cause of cynophobia as well as the best methods of treatment. First of all, not everyone who is afraid of dogs is cynophobic. Cynophobia is not apprehension over a particular type of dogs, such as large dogs. It is more of a severe fear that leads to panic attacks. The following symptoms are typical of a person experiencing cynophobia.

A person with cynophobia has an excessive and unreasonable fear of dogs. For example, a dog doesn’t even have to be present for the person to experience panic. Just the thought or anticipation of the presence of a dog can trigger excessive fear. The person will probably avoid going to a place where dogs could be present. Also, friendly well-behaved dog s can elicit a fear response.

Adults with cynophobia tend to recognize that their fear of dogs is unrealistic and excessive, though this recognition does not keep them from experiencing it. In children and adolescents, this recognition is less likely.

As mentioned, people with cynophobia avoid dogs whenever possible and go out of their way to do so. Often, they will perceive the presence of a dog before anyone else does. The excessive need to avoid dogs sometimes interferes with the person’s daily functioning and is a source of embarrassment. For example, a person with whom they are dating may not believe how bad the fear actually is.

Research points to three main possibilities exist as to why a person may be afraid of dogs. As with most specific phobias, cynophobia usually develops during childhood between the ages of 8 and 13. The child may have had a personal encounter with a dog that ended in being bitten, chased, or otherwise threatened. Alternatively, they may have witnessed another person having a similar negative experience with a dog.

Research has suggested that if the person who was harmed by a dog is a close friend or family member, the experience is likely to trigger a phobia towards dogs in the future. Studies have also found that cynophobes learn their behavior indirectly, usually from a cynophobic parent or from the media.

People who spend time around dogs as a child are less likely to develop a phobia. There are exceptions, and some people fear dogs without having had any of the above experiences. Evolutionary psychologists believe that a fear of dogs evolved in humans as a survival mechanism as humans learned to fear and to avoid predators. Evolutionary psychology holds that cynophobia is a combination of genetic and experiential factors.

Exposure therapy involves spending time in the presence of the object of the fear, such as dogs in the case of cynophobia. The point of this approach is used to retrain the brain, demonstrating that dogs are harmless and do not merit an intense fear reaction. With repeated exposures, the brain gradually becomes accustomed to relaxing in the presence of dogs. Another newer type of exposure therapy is auditory-visual virtual reality.

Relaxation training is any method, process, procedure, or activity that helps a person to relax and to attain a state of increased calmness. It can help by teaching how to control fear by way of using methods such as meditation, visualization exercises and controlled breathing routines.

Eye Movement Desensitization and Reprocessing (EMDR) is a psychotherapy treatment that was originally designed to alleviate the distress associated with traumatic memories. EMDR is another phobia protocol with which good results have been achieved. EMDR is a treatment for distressing memories and related pathologies that can be effective in treating anxiety disorders which follow a traumatic experience (e.g., dog phobia after a dog bite), and less effective for those of unknown onset.

Whatever type of therapy is used, several factors dictate how many sessions will be required to completely remove the phobia. Studies have suggested that those who overcome their phobia are typically able to maintain the improvement over the long-term. Because avoidance contributes to the perpetuation of the phobia, constant and safe real world interaction is critical during and after therapy to reinforce positive exposure.

Doogan, Sharon; Thomas, Glyn V. (1992). Origins of fear of dogs in adults and children: the role of conditioning processes and prior familiarity with dogs. Behaviour Research and Therapy. 30 (4): 387–394.