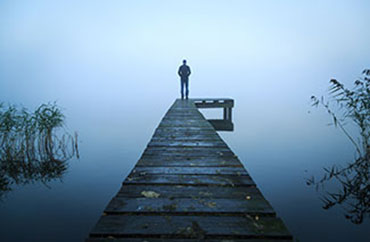 As modern medicine has made huge advances the process of death itself has changed. It has been transformed from an often sudden event into a lengthy process that begins with a terminal diagnosis.

The diagnosis along with its subsequent prognosis is many times the beginning of a long, protracted and painful crisis. This process is what mental health professionals have termed “the new grief”.

One the most prominent features of this new type of grief is that it tends to involve friends and family far more than a sudden death. This phenomenon turns loved ones into caregivers and an ongoing support system. Through this process the stress is spread through everyone involved.

Prolonged grief disorder (PGD) is a syndrome experienced by about 10 percent of bereaved survivors. It differed from other types of grief in that the symptoms are intense, frequent, and disabling everyday for six months or more after the death. A person affected person by PGD is so incapacitated by grief he or she  becomes focused on the loss and unable to care about much else.  Some of the features of PGD are seen in various types of grief, whether the passing of a loved one is sudden or protracted. The symptoms of PGD are as follows:

The activation of the nucleus accumbens may be important in grieving caregivers where the caregiver felt a significant sense of reward prior to their loved ones death. The simple loss of feeling needed by a dying loved one can have a life-changing impact on how the caregiver sees themselves over time. It’s understandable how the act of caregiving can increase a person’s feeling of self worth over time.

After the death of a loved one, it is not unusual for their caregivers to develop different forms of guilt, such as survivor’s guilt. Another common form of guilt is over feeling impatience while caregiving.  Unfortunately, the stress created by chronic or terminal illness often manifest in impatience as the caregiver’s reserves of energy are depleted.

It’s always a good idea to visit a grief counselor after the loss of a loved one. Because a grieving individual is so close to their pain they probably cannot adequately judge how well they are or are not functioning.  Counseling can also help the grieving process but helping a person to accept and embrace the reality of upheaval, as opposed to resisting it. Denying feelings or avoiding dealing with issues related to the loss are likely to prolong the grieving period and exacerbate any difficulties associated with the grieving process.