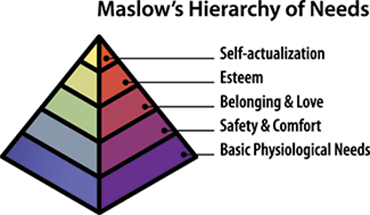 Maslow’s Hierarchy of Needs is a theory of psychological development developed by Abraham Maslow in a 1943 paper entitled “A Theory of Human Motivation.” Over the span of his career as a psychologist, Maslow expanded on his original idea to include his observations of natural curiosity.

In order to discover what motivated human behavior, Maslow studied people who be believe to be exemplary people including as Albert Einstein and Eleanor Roosevelt. Additionally, he studied the healthiest segments of the general population, such as the top 1% of the college students in one study.

Maslow’s hierarchy of needs is usually depicted in the shape of a pyramid with the most fundamental levels of needs at the bottom and the need for self-actualization and self-transcendence at the top. Maslow called the four basic layers of the pyramid — esteem, friendship and love, security, and physical needs —  “deficiency needs.”

According to Maslow, if these basic needs were not met, the individual may feel anxious. He suggested that the most basic level of needs must be satisfied before a person will be motivated to seek higher level needs. Maslow coined the term “metamotivation” to describe the motivation of people experience when they strive for self improvement.

Maslow’s Expansion of His Hierarchy of Needs

As Maslow continued to study human developmental psychology, he expanded hierarchy of need. The five stage model was extended to include cognitive and aesthetic needs as well as transcendence needs. The changes to the original five-stage model included a seven-stage model and a eight-stage model shown below.

Self-actualization is a term that has is used in a number of psychology theories. It typically is the phenomena of realizing one’s full potential. The search for spiritual enlightenment, pursuit of knowledge, and the desire to be of service are examples of self-actualization. Maslow has received credit for popularizing the term with his hierarchy of needs theory. He believed that to become self-actualized, the person must not only achieve the previous needs, but master them.

Hierarchy of Needs and Mental Health

It’s important for anyone recovering from a mental health problem such as anxiety, depression or addiction to first focus on the basic needs for shelter, food, and water. This even holds true for relationship problems. When basic needs are met, the person can then focus on the process of healing.

Maslow believed that the failure to have our needs met at various stages of the hierarchy led to illness, particularly mental health issues. For example, individuals who do not feel loved or a sense of belonging may experience depression or anxiety. When an individual feels supported they can no longer feel alone in this world, and consequently, the hold of loneliness may drastically lessen. That’s how hope is born. Hope is  the tip of the mental health iceberg. When someone sees that a solution is possible, they often start to take action.

When safety needs are not met, trauma can sometimes occurs.  Safety needs are personal security, financial security, and health and well-being, which are more fundamental than physiological needs. Safety worrying is the major reason for mental disorders, such as anxiety, phobia, depression, and PTSD.