The Five Stages of Sleep 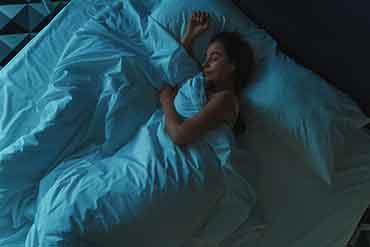 Scientists categorized the stages of sleep based on the characteristics of the brain and body during sleep. Stage 1,2,3, and 4, are categorized as ‘non-REM sleep’, and the fifth stage, is REM sleep. Generally, brainwave frequencies and amplitudes from an electroencephelogram (EEG) are used to differentiate the different stages of sleep, along with other biologic rhythms including eye movements (EOG) and muscle movements (EMG).

Non-REM Sleep of the Sleep Cycle

Stage 1 of the sleep cycle is the lightest stage of sleep. The EEG brain frequency is slightly slower than during wake time. There is muscle tone present in the skeletal muscles. Breathing occurs at a regular rate.

Stage 2 usually follow Stage 1 and represents deeper sleep. During Stage 2 sleep, the sleeper is less able to be awakened. Stage 2 sleep is characterized by ‘saw tooth waves’ and sleep spindles.

Stage 3 and Stage 4 sleep of the sleep cycle are progressively deeper stages of sleep. These stages of sleep are also called ‘Slow Wave Sleep’ (SWS), or delta sleep. During SWS, the EEG shows a much slower frequency with high amplitude signals (delta waves). A sleeper in SWS is often difficult to awaken. Some studies have demonstrated that very loud noises, sometimes over 100 decibels, will not awaken some during SWS. As humans get older they spend less time in slow wave deep sleep and more time in Stage 2 sleep.

Slow-wave sleep is generally referred to as deep sleep, and is comprised of the deepest stage of NREM. In stage three we see the greatest arousal thresholds, such as difficulty in awakening, and so on. After being awoken, the person will generally feel quite groggy, and cognitive tests that have been administered after being awoken from the third stage show that for up to half an hour or so, and when compared to awakenings from the other stages, mental performance is moderately impaired. This is a phenomenon known as sleep inertia. When sleep deprivation has occurred there’s generally a sharp rebound of slow-wave sleep, which suggests that there’s a need for slow-wave sleep. It now appears that slow-wave sleep is a highly active state, and not a brain quiescence as previously believed. In fact, brain imaging data shows that regional brain activity during non-REM sleep is influenced by the most recent waking experience

Stage 5 of the sleep cycle, or REM sleep, is the stage of sleep associated with dreaming. It is very different physiologically from the other stages of sleep. The EEG resembles wake time. However, the skeletal muscles are atonic, or without movement. The breathing is more erratic and irregular. The heart rate often increases. It is theorized that muscle atonia evolved in order to protect the individual from injury during sleep.

The body cycles through the stages of sleep each night: three stages of non-REM sleep and one stage of REM sleep. During these sleep cycles, our breathing, heart rate, muscles, and brain waves are all affected differently.

Getting enough sleep is important for health-promoting activities like digestion, growth, and memory. Certain sleep disorders, like insomnia, can cause poor sleep quality and difficulty functioning throughout the day. The best thing someone can do to improve sleep quality is to address any underlying conditions and work on sleep hygiene.