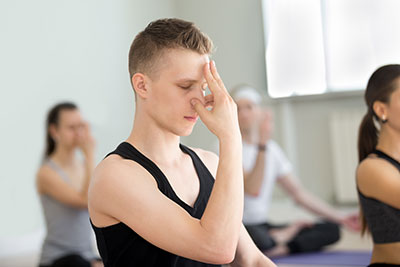 There are many breathwork approaches. You may want to try a few different techniques to see which type resonates with you. It can be advantageous to attend a class and get instruction from a professional.  Some of the more common types of breathwork include the following.

Holotropic Breathwork is a practice that was developed by psychiatrists Stanislav and Christina Grof in the 1970s out of their interest in altered states of consciousness as a therapeutic tool. It involves controlling one’s breathing patterns to influence mental, emotional and physical states.

In this type of breathwork, the goal is to achieve wholeness of mind, body and spirit. Sessions are facilitated by certified practitioners who have completed the Grof Transpersonal Training program designed by Stanislav Grof. With the aid of evocative music and light bodywork, participants are guided through breath exercises while lying down. This is meant to induce an altered state of consciousness.

Holotropic breathwork is often conducted with groups. This allows people to work in dyads and support each other’s processes. Participants create mandalas related to their breathwork experience immediately after the group breathing exercises. Sessions end with sharing and discussion. This helps participants integrate what they have learned from the session.

This type of breathwork is also known as “conscious energy breathing.” It’s based on the premise that all humans carry with them the trauma of their birth experience.

Rebirthing-breathwork is a type of breathwork invented by Leonard Orr. Orr proposed that correct breathing can cure disease and relieve pain. Orr developed rebirthing therapy in the 1970s after he supposedly re-lived his own birth while in the bath.

The goal of rebirthing breathwork is to help people release energy blockages that have been stored in the body and mind due to suppressed trauma. In treatment, participants are asked to lie down, relax and breathe normally. Through the use of conscious connected circular breathing, inhibitions surface and the tensions of past trauma and related anxiety are allowed to surface. Deep relaxation is used to promote brain waves that lead to the release of subconscious issues and pent-up energy.

Shamanic breathwork is a somatic process that is based upon the  premise that within every person resides an inner healer—an inner shaman if you will—that knows how to heal, transform and navigate through life by connecting to a force that is greater than oneself.

Using a breathing technique in conjunction with chakra attuned music, the Shamanic breathwork methods enables the participant to experience deep healing and transformation on a spiritual, psychological, and physical level. Shamanic breathwork can be used to enter altered states of consciousness, increase paranormal abilities, resolve old traumas and transform unproductive modes of thinking. It incorporates the concept of entering a shamanic trance through breathing. It can also be used to reduce anxiety by resolving old traumas and unproductive modes of thinking.

Zen yoga breathwork is actually a specific type of yoga as opposed to a distinct form of breathwork. It includes gentle stretching, meditation, flowing movement, and mindful breathing to help reduce stress and anxiety.

Zen yoga breathwork uses the breath to control the mind. In practicing this approach, the participant sits in a prescribed position and is encouraged to shut off all thoughts and images, breath in a shallow manner and become more reflective.

The breathing practice known as diaphragmatic breathing is defined as an integrative body–mind therapy that addresses stress and psychosomatic conditions. A psychosomatic disorder is a disease which involves both mind and body. Some physical diseases are thought to be particularly prone to be made worse by mental factors such as stress and anxiety. Your current mental state can affect how bad a physical disease is at any given time.

Diaphragmatic breathing involves contraction of the diaphragm, expansion of the stomach, and deepening of inhalation and exhalation, which consequently decreases the respiration frequency and increases blood flow. Some people consider any breathing practice to fall under the umbrella of “diaphragmatic breathing” but it is actually a specific practice in itself.

Benefits of diaphragmatic breathing have been studied in association with meditation and ancient eastern religions, such as Buddhism, Taoism and martial arts. It’s a core component of yoga and tai chi and contributes to emotional balance and social adaptation. It has been found particularly effective at reducing anxiety by inducing the relaxation response.

Douglas-Klotz N. (1997). The natural breath: Towards further dialogue between Western somatic and Eastern spiritual approaches to the body awareness of breathing. Religious Studies and Theology, 16(2), 64.