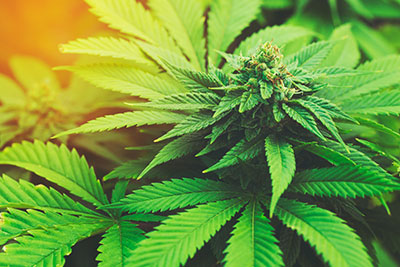 Cannabis is an herbaceous species originating in Central Asia which has been used in folk medicine and as a source of textile fiber throughout recorded history. This fast-growing plant has seen a resurgence of interest because of its multi-purpose applications.

A 2019 survey conducted by Syracuse University found that consumers of cannabis reported personal use for pain (64%), anxiety (50%) and depression (34%). In 2016, a similar Washington State University survey found that in 1,429 participants identified as medical cannabis users, over 50% reported using medicinal cannabis specifically for depression.

Cannabis is a treasure trove of valuable phytochemicals with huge pharmaceutical potential. Cannabinoids and terpenes develop in the resin glands, or trichomes, on the flower and leaves of cannabis plants.

Cannabinoids represent the most studied group of compounds, mainly due to their wide range of pharmaceutical effects in humans, including psychotropic activities. Cannabinoids are a class of chemicals derived from hemp and cannabis that interact directly with the cannabinoid receptors found throughout the human endocannabinoid system.

Terpenes are the compounds responsible for a plant’s scent and flavor. The therapeutic and commercial interests of cannabis terpenes are valued for their treatment of psychological disorders. Cannabis terpenes have unique benefits in that they can increase the blood-brain barrier permeability. This characteristic has notably been used to patent a transdermal patch, which delivers cannabinoids into the bloodstream by using terpenes as a permeation agent. Terpenes modulate the affinity of THC for the cannabinoid receptor type 1 (CB1) and interact with neurotransmitter receptors. CB1 is a G protein-coupled cannabinoid receptor that in humans is expressed in the peripheral nervous system and central nervous system.

In view of the potential of phytocannabinoid-terpene synergy, novel therapeutic treatments using CBD-terpene extracts are expected to be developed for a number of psychiatric disorders, including anxiety, insomnia, dementia, addiction, and depression.

Phytocannabinoids and terpenes can modulate the endocannabinoid system and the 5HT1A receptor in the brain, providing an antidepressant effect. In a study at the Beth Israel Medical Center in New York, 360 cancer patients using cannabis experienced a significant reduction in depression compared to placebo.

Another area where cannabis has been found effective for psychiatric disorders is the treatment of posttraumatic stress disorder (PTSD). PTSD is strongly associated with depressive disorders. In fact, research has found that half of all people with PTSD also have co-occurring major depressive disorder . A 2015 review looked at 11 studies that used cannabis for the management of PTSD in returned armed services veterans. The researchers concluded that cannabinoid use was associated with significant improvements in PTSD symptoms. Moreover, they discovered that substantial numbers of military veterans with PTSD use cannabis to manage PTSD and depression symptoms.

As more states legalize the medicinal and recreational use of marijuana, the application of cannabis for psychiatric disorders will no doubt expand. However, research has revealed several downsides to long term cannabis use which can directly impact depression. Studies have found that everyday use of marijuana can cause memory loss over time. Memory impairment occurs because THC alters the areas of the brain responsible for memory formation. Depression has been linked to memory problems, such as forgetfulness or confusion.

The effectiveness of cannabis in treating depression varies greatly from person to person. Research has found that everyday use can have a negative impact on the brain’s motivation system and increase depression in some people. Epidemiological evidence has revealed a greater level of depressive symptoms in heavy cannabis users compared to light-users and non-users. Due to this, higher doses of THC should probably be avoided or used with caution in people with a depressive disorder.