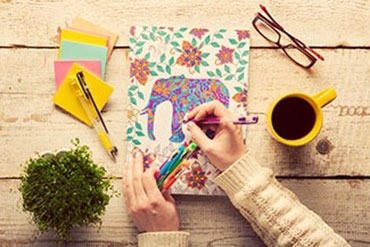 Coloring books for anxiety are amazing tools that help you channel negative energy, relieve stress, and lessen feelings of anxiety. In other words, this article reveals the 5 best adult coloring books that specifically help people with anxiety.

Though the first commercially successful adult coloring books were published in 2012 and 2013, the once-niche hobby has now grown into a full-on trend, with everyone from researchers at Johns Hopkins University to the editors of Yoga Journal suggesting coloring as an alternative to meditation. Here’s why you might want to open a page and chill.

It’s important to note that using an adult coloring book is not exactly the same as completing an art therapy session. Coloring itself cannot be called art therapy because art therapy relies on the relationship between the client and the therapist.

Despite the fact that coloring and art therapy aren’t quite the same thing, coloring does offer a slew of mental benefits. Coloring definitely has therapeutic potential to reduce anxiety, create focus or bring about more mindfulness. Research in 2005 proved anxiety levels dropped when subjects colored mandalas, which are round frames with geometric patterns inside. Simply doodling, though, had no effect in reducing the other subjects’ stress levels.

Just like meditation, coloring also allows us to switch off our brains from other thoughts and focus only on the moment, helping to alleviate free-floating anxiety. It can be particularly effective for people who aren’t comfortable with more creatively expressive forms of art.

Adults should skip the crayons and go straight for the colored pencils because precision is everything when it comes to tuning in. Crayola has a complete guide that shows how to take your tools up a notch by blending colors, shading and adding highlights and lowlights to your newfound masterpieces.