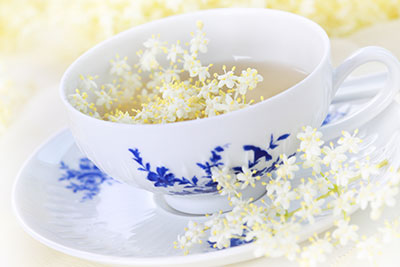 Chamomile (Matricaria chamomilla L.) is a well-known medicinal plant species from the Asteraceae family often thought of as the star among medicinal species. It’s a highly favored and much used medicinal plant in folk and traditional medicine and it can be effective in reducing symptoms of anxiety.

Chamomile has been widely used in the treatment of generalized anxiety disorder (GAD). A Canadian study examining the effectiveness of herbal medicine on anxiety disorders found that chamomile showed significant inhibition of GAD activity.

In a 2014 trial, researchers conducted a randomized, double-blind, placebo-controlled efficacy and tolerability trial of chamomile extract in patients with mild to moderate GAD. For the study, 61 outpatients diagnosed with GAD were randomized to either chamomile extract or placebo for 8 weeks. After 8 weeks, the researchers observed a significantly greater reduction in anxiety in the chamomile group as measured by the Hamilton Anxiety Rating test versus placebo therapy.

In a similar study in 2018, some of the same researchers tested chamomile on 45 patients with GAD. Their salivary cortisol was assessed for three days pre- and post-treatment, at 8am, 12pm, 4pm, and 8pm. Symptom improvement during treatment was associated with pre-to-post treatment changes in cortisol. The researchers concluded that the increases in morning salivary cortisol and the diurnal cortisol slope were the mechanisms that made chamomile effective in the treatment of GAD.

Chamomile is widely regarded as a mild tranquillizer and sleep-inducer. Traditionally, chamomile preparations, such as tea and essential oil aromatherapy, have been used to treat insomnia and to induce sedation. Sedative effects may be due to the flavonoid apigenin which binds to benzodiazepine receptors in the brain.

In a study of chamomile tea, patients reported to have immediately fallen into a deep sleep lasting for 90 minutes after consumption. In another study, inhalation of the vapor of chamomile oil reduced a stress-induced increase in plasma adrenocorticotropic hormone (ACTH) levels.

Different preparations of chamomile have been developed, the most popular of which is in the form of herbal tea. Chamomile is most often prepared as an infusion of the blossoms of German chamomile, and less commonly of Roman chamomile.

Most experts say chamomile is safe. However, it can cause drowsiness and, in large doses, vomiting. It also has the potential to trigger allergic reactions in people who are allergic to related plants in the daisy family, although such reactions are rare. Avoid it if you are allergic to ragweed, daisies, marigolds, or chrysanthemums. Also, chamomile contains small amounts of coumarin, which can have mild blood thinning effects.