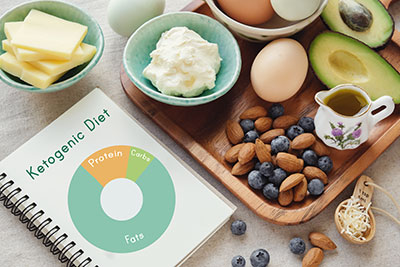 Ketogenic diets have been around for about 100 years and have proved to be valuable in the treatment of neurological conditions, most notably epilepsy. They’ve also shown promise in the management of other neurological disorders such as anxiety disorders, Parkinson’s disease, traumatic brain injury, multiple sclerosis, and amyotrophic lateral sclerosis (ALS). Ketogenic diets have been used to treat a variety of medical conditions and have reached fad status as a weight loss diet.

The treatment of seizures with water-only fasting eventually lead to the development of the ketogenic diet, a high-fat, adequate-protein, low carbohydrate diet used primarily to treat drug-resistant epilepsy in children.

The ketogenic diet involves a diet that mimics a state of fasting and forces the body to burn fats rather than carbohydrates. The diet enables some of the biochemical effects of fasting while providing calories for the body in the form of fats and protein.

The very low carbohydrate ketogenic diet (VLCKD) is a dietary protocol that has been used since the 1920s as a treatment for refractory epilepsy. Refractory epilepsy means that medicine isn’t bringing a person’s seizures under control. You might hear the condition called other names, such as uncontrolled, intractable or drug-resistant epilepsy.

The VLCKD shares several pathways that have been found during a fasting state (Paoli, 2019a,b). After several days of drastic reduction of carbohydrate intake, low glucose levels in the body are insufficient for fat oxidation and the energy required for the central nervous system, forcing the body to use fats as a primary fuel source. These mechanisms are thought to be why the VLCKD is useful for people with neurodegenerative diseases.

Normally, carbohydrates from food are converted into glucose, which is important in maintaining brain function. When an individual fasts—or is on a ketogenic diet—the liver begins to convert fat into fatty acids and ketone bodies, which replace glucose as an energy source in the brain. Research has found that ketone bodies are associated with neurological diseases, such as anxiety disorders.

For some epileptic patients, an elevated level of ketone bodies in the blood leads to a reduction in the frequency of epileptic seizures. However, this effect only occurs in a limited number of epileptic patients. Still, the ketogenic continues to be used in the treatment of childhood epilepsy.

While researching mechanisms in the brain that trigger panic attacks, scientists accidentally uncovered some of the chemical mechanisms that explain why a ketogenic diet helps anxiety. In groundbreaking research, scientists discovered specific brain mechanisms behind recurrent bouts of intense anxiety. The study, conducted at University of Iowa, found that a basic metabolic factor, pH (acidity) has an essential role in fear.

The Ketogenic Diet and the Brain

The pH of our brain is carefully regulated and a large increase or decrease in brain acidity can seriously disturb brain functioning. Research shows that pH can sometimes rise and fall in synapses, the points of communication between individual neurons in the brain. Some of these synapses have specialized proteins that sense acidity. These proteins, called “acid-sensing ion channels (ASICs),” stimulate neurons when increased acid is detected.

The study genetically modified the brains of mice removing these ASIC genes. They discovered the altered mice had a greatly reduced capacity for fear. When the researchers restored the ASIC gene, they observed a normalization of fear behaviors.

The same study also found that carbon dioxide acts like an acid in the brain, and that inhaling elevated concentrations of carbon dioxide triggered strong fear reactions. Other research has found that most patients with panic disorder will experience a panic attack when they inhale air containing 35% carbon dioxide, while most healthy volunteers will not.

Interestingly, the close relatives of panic patients will also panic during carbon dioxide inhalation, even if they have never suffered from an anxiety disorder. A hypersensitivity to acid in the brain appears to be part of the inherited vulnerability to panic attacks and other types of anxiety.

Research has also found that patients with panic disorder tend to generate excess lactic acid in their brains. Lactate is constantly being produced and consumed by the body during brain activity, but if too much accumulates in the brain, it will make the brain more acidic, turning the lactate into lactic acid.

Studies show that brain pH changes are a crucial part of the mechanism of certain fear behaviors (Esquivel, 2010). Researchers and drugs companies are hoping to develop medications that inhibit these ASICs or otherwise modify the metabolic or neurochemical pathways involved in the regulation of fear and anxiety by brain acidity. Until then, diet may be the best line of defense.

On average, most people have a very acidic diet, which results in a lower resistance and an increased risk of anxiety. Certain foods, such as sugar and processed products increase acidity in the body whereas other foods lower it.

Here’s where the research on ketogenic diet and anxiety comes in. In 2019, researchers at the Beijing Institute for Brain Disorders in China found that a ketogenic diet (high-fat, low-carbohydrate) alkalizes the brain. It’s long been proposed that an alkaline diet helped anxiety, but proponents were short on proof. The classic alkaline diet calls for a reduction of fatty and processed meats while encouraging more fruits and vegetables. This study upended this notion.

Here’s what a classic ketogenic diet looks like. A healthy ketogenic diet—one that’s good for your brain—consists of about 75% fat, 20% protein and 5% of carbs per day. In sum, it focuses on high-fat, low-carb foods like eggs, meats, dairy and low-carb vegetables, as well as sugar-free beverages. It also restricts highly processed items and unhealthy fats.