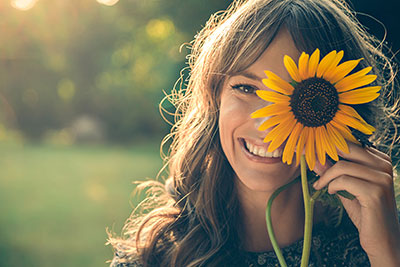 People who are optimistic tend to be happier and in better health than those who are persistently stressed, hostile, or pessimistic. A sense of optimism, demonstrated in the way an individual explains the causes of daily events, has been shown to protect health, whereas pessimism has been linked to overall poor health and anxiety.

Positive psychology, a branch of psychology that focuses on determining and promoting the factors that help people to flourish, has been referred to as the science of happiness. Rather than merely exploring the roots of unhappiness, positive psychology investigates the ingredients of a good life and weighs the effects of traits like optimism, humor, passion, and eccentricity.

Research has suggested that optimists tend to fare better than pessimists when coping with stressful situations, have less illness and make more money. Optimists are more likely to look for the positive aspects in a stressful situation and use practical problem-solving strategies to resolve conflicts.

There is significant evidence that the emotional traits observed in optimists positively influences the immune system. Researchers at Carnegie Mellon University in Pittsburgh revealed that people with higher levels of stress and negative moods were more susceptible to infections, colds and serious illness than those with less stress and more positive moods.

A British study at Cardiff University had similar findings. After studying 92 adults with asthma over 19 years, the investigators documented an association between emotional traits and the incidence of infections. Those with negative psychological traits and a generally pessimistic attitude were substantially more likely to experience immune related problems, particularly respiratory infections.

A study in the Netherlands studied the association between optimism, depression and anxiety in victims of a natural disaster. The results indicated that compared to optimists, pessimists nurtured little hope for the future and were more at risk for depressive and anxiety disorders, with subsequent impairment of social functioning and quality of life.

Laughter has been shown to improve the immune system by raising levels of immunoglobulin A (IgA), an antibody that protects against colds and the flu. Watching as little as 30 or 60 minutes of a comedy video is enough to increase both salivary and blood levels of IgA, in both adults and children.

Researchers at the University of California at Riverside reviewed a number of studies on happiness and concluded that optimists make more money, have more friends, are more likely to get and stay married, and live longer than their pessimistic counterparts. Similarly, a 30-year study of 839 Mayo Clinic patients reported that those categorized as pessimists had a 19% higher risk of mortality over the course of 30 years than those who were optimists.

In a review of 20 studies, positive psychology interventions (PPIs) were compared to other therapies, including supportive psychotherapy, cognitive behavioral therapy and dialectical behavior therapy. All interventions were aimed at increasing positive feelings, cognitions and behaviors. The researchers concluded that PPIs had a similar therapeutic effect as the other therapies and that PPIs were effective in improving well-being and alleviating common psychological symptoms, including depression and anxiety.

Sometimes all we lose sight of the fact that we be being pessimistic. To become more optimistic, start by not taking everything so seriously. The action of avoiding pessimism will naturally boost optimism. Techniques used in positive psychology include journal writing, maintaining a support system of family and friends and having a sense of humor. Next time you find yourself feeling anxious or taking life too seriously, watch a comedy or read an amusing book that illustrates the absurdity in life.

Linley, A. (2008). Average to A+: Realising Strengths in Yourself and Others. CAPP Press.