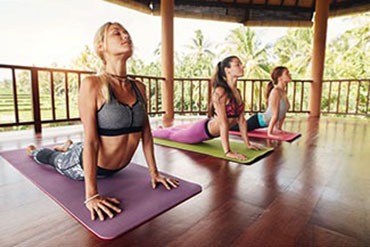 You typically have less anxiety and enter a more relaxed state. As soon as you start breathing deeply, you slow down out of fight-or-flight and calm your nervous system.

Yoga also helps you build your sense of self. Through yoga, you get to know yourself and cultivate a more nonjudgmental relationship with yourself. You are building self-trust. You exercise more and eat healthier, because your unconscious mind tells you, “I’m worthy of this me time, this effort.”

At the end of the day, everything comes down to your relationship with yourself. When you get more confident and become more rooted in your sense of self and your center, you develop a healthy, balanced ego, where you have nothing to prove and nothing to hide. You become courageous, with high willpower. You’re not afraid of difficult conversations—you know you’re still going to be alright at the end of the day.

Research has shown that yoga can improve your romantic relationship. When you’re more centered and more peaceful with yourself, you’ll be the same way with your partner—you’ll view them through the same lens of compassionate, unconditional love. You’re less reactive—for example, you may know that snapping at your partner is not a wise choice.

As Carl Jung would say, yoga helps you become aware of your “shadow” qualities. The yoking of solar and lunar (light and dark) in yoga makes us recognize qualities in ourselves that we were not aware of, helping us be more mindful. A lot of my work centers on the shadow concept from Carl Jung. How do we look at those places in our bodies where we hold tension, tightness, knots of energy? That’s typically where we are holding our psychological or emotional energy. We work from the outside in, so asana is so important. A backbend will open your heart and release the stiffness between the shoulder blades—at some point, you will have some sort of emotional release, which you may or may not be conscious of. It’s about doing the inner work to shift or change and be open to doing your best with your weaknesses and faults.

Some people even claim that yoga can help you deal with family of origin issues. Essentially that’s our karma—we can’t give back our family, we’re born into it. It’s about owning what I call sacred wounds (rather than blaming) and taking them on more mindfully.

You’re the only one that can change—the only thing you can do is control your actions and your behavior. Other people will inevitably be forced to show up in a different way you’re showing up in a different way. Think of the Warrior poses—yoga helps you rise up and do your best.

Yoga has been studied as an effective treatment for some types of depression. A series of studies from the Netherlands found yoga provided some benefit for people with chronic depression. In the first study, men and women who suffered from depression for an average of 11 years experienced a reduction in depression, anxiety, stress, and rumination after they took weekly 2.5-hour classes for nine weeks in conjunction with therapy and antidepressants. In the second study, depressed college students who practiced mindful yoga for 30 minutes with their instructor and then at home for eight days with an instructional video experienced a greater reduction in symptoms, even two months after, compared to another relaxation treatment.

Yoga may also help ease symptoms of anxiety and depression. A 2016 study conducted at the University of Pennsylvania found people with major depressive disorder (MDD) who do not fully respond to medication, saw a decrease in depression and anxiety after practicing Sudarshan Kriya yoga (a cyclical controlled breathing practice), while those who took meds but did not practice yoga saw no changes.

Yoga helps calm the nervous system of patients with anxiety. It teaches clients that they have control of their stress reaction, gives them a coping skill for when they are overwhelmed, gives them experience in practicing calming down which is helpful for times of distress.