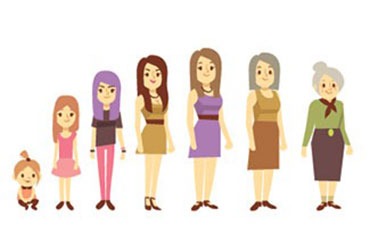 A life cycle describes the different stages that a living organism goes through during its lifetime. The duration and number of life stages differ from specie to specie.

Erikson discerned eight differing stages that humans experience, each with a centralized conflict that is significant along with certain traits and behavioral outcomes.

The stages go from infancy (birth to 18 months) to maturity (age 65 to death). During each stage, the person develops a life skill which Erickson called a “virtue.”

The first stage of development is Trust vs. Mistrust, which takes place from birth to 18 months. During this stage, a child learns to trust that the world is safe and caregivers can be relied on for primary needs or to mistrust the world because those needs are not met. Successful resolution of any conflict during this stage brings about what Erickson called the virtue of Hope.

The second stage is the conflict of Autonomy vs. Shame and it takes place from 18 months to 3 years of age. As a child learns to walk and begins to explore her environment, she learns autonomy and develops control over bodily her functions as well as her environment. As the child successfully resolves shame and doubt over her abilities, she develops the virtue of Will.

The third stage, which happens from 3 to 5 years of age, is Initiative vs. Guilt. Here, a child learns initiative as she begins to do things for herself or guilt over making those choices. Successful resolution of conflict brings about the virtue of Purpose.

The fourth stage, from 6 to 12 years, is Industry vs. Inferiority. As the child attends school, she starts to compare herself with others and develops a sense of industry as she accomplishes novel acts or a feeling of inferiority if she judges herself as inadequate. If this stage is successfully resolved, she learns the virtue of Competence.

The fifth stage occurs from 12 to 18 years of age when the child struggles between Identity vs. Role Confusion. As an adolescent, a sense of identified emerges, but role confusion can also happen as she tries to reconcile personal desires with those of other people. Successful resolution of this conflict enables the virtue of Fidelity.

The sixth stage, from 18 to 35 years, happens during young adulthood. The primary conflict during this period is Intimacy vs. Isolation as the person attempts to mature and begin a family. If this significant conflict is resolved, the individual learns Love.

The seventh stage is from 35 to 65 years of age during which an individual struggles with the conflict between Generativity vs. Stagnation. This can be associated with a midlife crisis, when the adult assess her contributions to family, friends and society or becomes self-absorbed and stagnates. Successful resolution of this conflict brings about the virtue of Care.

The eighth and last stage occurs from the age of 65 onwards and is the conflict of Integrity vs. Despair. During late adulthood, the individual reflects back at her accomplishments in life. If this stage is successfully resolved, the individual gains Wisdom.

Erikson’s theory has been studied extensively and used in teaching and child-rearing practices. It has provided psychologists and psychotherapists with a type of roadmap with which to determine the significant conflict that needs to be resolved by a patient.

As far as its overall usefulness in psychotherapy, Erikson’s theory has been questioned as to whether his stages should be regarded as sequential and only corresponding within the age ranges he suggested. For example, there has been significant debate as to whether people search for identity only during the adolescent years. Another question is whether the conflict during one stage need to be resolved before other stages can be completed. Proponents of his theory note that Erikson said that each process associated with a particular stage occur throughout the lifetime in different ways and that the stages represent periods during which the conflicts become most prominent.